To share your memory on the wall of Donald Rice, sign in using one of the following options:

He was born Tuesday, November 4, 1947 in Hazard, Kentucky. He was the son of the late James Rice an... Read More
Donald Edward Rice, 71 of Sparta,Tennessee passed away on Thursday, July 11, 2019, at Tennessee Veteran's Home in Murfreesboro,Tennessee.

He was born Tuesday, November 4, 1947 in Hazard, Kentucky. He was the son of the late James Rice and Dorothy Kilburn Rice. Donald served in the United States Air Force during the Vietnam War, and he was a retired Police Chief. He was a member of FOP in Cookeville, TN, Cookeville Corvette Club, Police and Fire Retirees of Ohio, Masonic Lodge F&AM of Ohio, and the International Association Chief of Police ICAP in Ohio.

In addition to his parents, he was preceded in death by his Father-in-Law, Willie Lee Selby.

His Wife of 53 years- Sandra Selby Rice of Sparta, TN

Funeral Services will be held at 2pm on Monday, July 15, 2019 at Oak Lawn Funeral Home with Military Honors provided by the Veteran's Honor Guard. Burial will follow in the Oak Lawn Memorial Cemetery. The family will welcome friends from 12pm until time of the service on Monday at the funeral home.

To send flowers to the family or plant a tree in memory of Donald Edward Rice, please visit our Heartfelt Sympathies Store.

Receive notifications about information and event scheduling for Donald

We encourage you to share your most beloved memories of Donald here, so that the family and other loved ones can always see it. You can upload cherished photographs, or share your favorite stories, and can even comment on those shared by others.

The Meyers Family and Noble & Bertha Selby and The Men and Women of the West Carrollton Police De have sent flowers to the family of Donald Edward Rice.
Show you care by sending flowers

We have been on vacation and recently found out about the sad news about my Chief and friend. He will be missed. We had lots of good memories from serving together on the West Carrollton PD. My thoughts and prayers to Sandy & Donnie JR. & Family. Dick Wilson
Comment Share
Share via:
TS

We Just found out about the tragedy news of the Chief. He will be missed but I will have a lot of good memories. Our thoughts and prayers to Sandy & Donnie JR. & Family.
Comment Share
Share via:
HS

Posted Jul 13, 2019 at 06:10pm
Sandy & Donnie, We were so saddened to hear about Don. Please let us know if we can do anything. We love and miss you dearly. You are in our prayers.

Flowers were purchased for the family of Donald Rice. Send Flowers

The Men and Women of the West Carrollton Police De

Posted Jul 13, 2019 at 12:20pm
With gratitude and appreciation. Thank you for your years of dedicated service.

The Men and Women of the West Carrollton Police De purchased flowers for the family of Donald Rice. Send Flowers 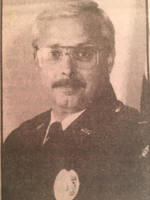